Home / NEWS REPORT / Details About Hima DAS.. Hima has won a total of five gold medals in 20 days, which is a remarkable achievement, India is proud of Hima Das.

Details About Hima DAS.. Hima has won a total of five gold medals in 20 days, which is a remarkable achievement, India is proud of Hima Das.

Hima has won a total of five gold medals in 20 days, which is a remarkable achievement, India is proud of Hima Das... 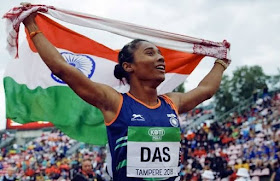 I have won the History Surgery Gold Medal while you were asleep.

Beta, we also woke up to see you running in the race ...

And Hima Das got emotional and cried on the phone ....

Responding to the daughter's achievement, Hima's father Ranjitdas told the media that 'I could not sleep with my wife Jonali last night. Because we were worried whether we would be able to provide enough food for those who came to congratulate Him after its success. Vegetables will not be lost. ? 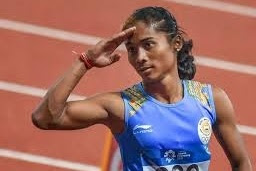 Look at the generosity of the daughter of such a modest family ... Half of the gold medal she received was donated to the Orissa Supplements Relief Fund.

Hima Das, a resident of Dhing village in Nagaon district of Assam, was born on January 9, 2000. The father of a laborer working on a paddy field in Assam, runs a family of six families in 6 Vigha land.

Thus, born a very ordinary peasant family and playing football in muddy mud, Hima didn't even have good boots to run on the racing track until two years ago. Today, a well-known company like Adidas is enjoying making Him as its brand ambassador.

In his childhood, the river's rivers, fields and forests, he spoke like a deer jumping like a deer. Himayan, who played football in the mud at an early age, saw an athletics coach. Heer Drew. He asked Hima to go ahead in the game. His parents also asked Him to proceed. But parents didn't want to. The daughter was underage and had to go to Guwahati for athletics training, which was 150 km away. Yet the coaches managed to persuade the parents.

Snow was introduced to a coach named Neoondas in Guwahati. The coach, who was a fan of real diamonds, realized that the real race for the Himalayas starts in the final 80 meters. The coach recognized Hima's hero and gave him a rental house in Guwahati. And the training of Hima started in Guwahati.

Coach Niyondas was stunned when Hima won the 100 and 200 meter races at the district level, wearing cheap insights. Then where did Hima stay .. !!

Winning a gold medal in a national inter-state competition recently played in Guwahati qualifies for the Asian Games in Indonesia in August.

Hima has won a total of five gold medals in just 20 days, which is a remarkable achievement.,

The President, Prime Minister, Amitabh Bachchan, Sachin Tendulkar and other top celebrities have congratulated him for this achievement.

When the flying fairy, who reached the gold medal directly from the paddy fields of Assam, got the gold medal, his family could not see the medal since there was no light. How pity this is ..!

When Hima Das was talking to the media about getting a gold medal, she did not speak fluent English ... "There was a lot of controversy when the tweet was made to the Athletics Federation. The federation has been widely criticized in social media. So apologize to the federation and praise its game.

In short, no matter how great you may be, poverty and backwardness do not change people's mentality ... your backwardness does not leave you behind ... it is proven by such events.

Well, neither the national government nor the cricketers from the national media have congratulated Hima Das for this achievement. This is also true though compassionate.

An 18-year-old girl is so proud of the country, I think it is a big deal. If you think this country is a matter of pride then raise Hima with a wreath.

Everyone can understand ..
Hima Das is proud of the country india..