Voter Verifiable Paper Audit Trail (VVPAT) or Verifiable Paper Record (VPR) is a method of providing feedback to voters using a ballotless voting system. A VVPAT is intended as an independent verification system for voting machines designed to allow voters to verify that their vote was cast correctly, to detect possible election fraud or malfunction, and to provide a means to audit the stored electronic results.It contains name of the candidate (for whom vote has been casted) and symbol of the party / individual candidate.
Voter verifiable Paper Audit Trail (VVPAT) machines are used during election process to verify that the vote polled by a voter goes to the correct candidate. VVPATs are a second line of verification particularly and are particularly useful in the time when allegations around Electronic Voting Machines' tampering crop up.
Election countdown begins, CEC-led team in Gujarat tomorrow,8 Oct.2017 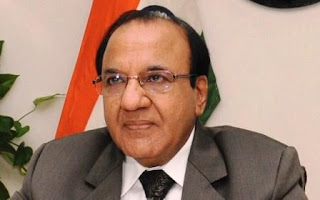 Achal Kumar Jyoti is the Chief Election Commissioner of India
Meetings are also scheduled with income tax officials, prohibition commissioner, RBI officials and representatives of leading banks, apart from nodal officers for election expenditure management.
the team will travel to Mahatma Mandir in Gandhinagar, to hold a review meeting with local election officials and top police personnel. According to sources, different aspects of poll management like electoral rolls, district management plan, polling stations, paid news, use of social media, etc will be discussed. Before the review meeting, the commission will flag off a mobile EVM-VVPAT demonstration centre, which will move around Gandhinagar district to create awareness about the use of VVPATs. Over 76,232 VVPAT (Voter Verifiable Paper Audit Trail) machines, which generate a paper trail of the votes cast, have been allocated to be used for the first time to conduct elections in over 50,100 polling booths across all constituencies in Gujarat. Over 4.3 crore voters are expected to exercise their franchise. The EC will also unveil a “Digital Atlas” and a pictorial book on voter awareness named ‘The Count Down Begins’. 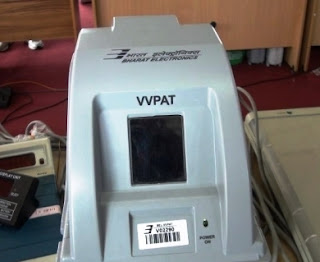 Voter Verifiable Paper Audit Trail (VVPAT) machines are used during election process to verify that the vote polled by a voter goes to the correct candidate. VVPATs are a second line of verification and are particularly useful in the time when allegations around Electronic Voting Machines’ tampering crop up. Parties have been making regular demands for VVPATs to be used during elections after alleging EVMs may not be completely secure and tamper proof.
After a voter presses the button on the EVM against
System Of Working : VVPATs
After a voter presses the button on the EVM against the chosen candidate, the VVPAT prints a slip containing name of the candidate and the election symbol and drops it automatically into a sealed box. The machines give the chance for the voter to verify their vote. The machine is placed in a glass case in a way that only the voter can see it. The slip is displayed to the voter for seven seconds after which the VVPAT machine cuts it and drops in into the storage box with a beep. The machines can be accessed, though, by the polling officials and not by the voter. 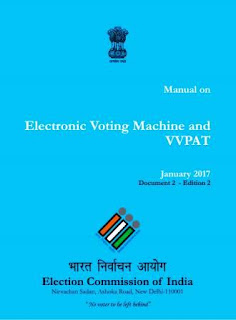 The Election Commission of India has not conceded to any allegation that the EVMs used for polling can be tampered with. However, VVPATs have been used in some elections in a bid to counter all allegation of tampering.
The Supreme Court of India, meanwhile, has for long held a supportive and extra cautious stand when it comes to voting. It had directed the EC in 2013 to introduce VVPAT in Lok Sabha Elections 2014 to improve voter confidence and ensuring transparency of voting. It was used in some phases but not in the entire polling process.
VVPAT system gives instant feedback to the voter showing that the vote polled has in fact been allotted against the candidate chosen.
System Of Working : VVPATs
View video online
Know About VVPAT (Voter Verifiable Paper Audit Trail) : Work Function Of VVPAT 2017-10-08T12:41:00+05:30 Rating: 4.5 Diposkan Oleh: MISSION EXAM